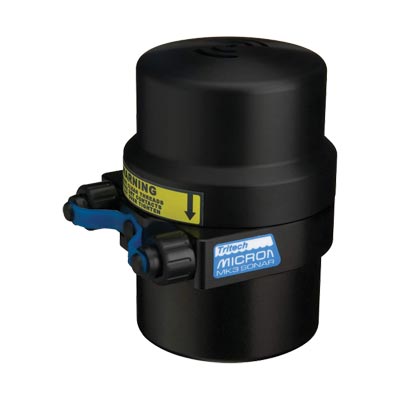 The Tritech Micron Sonar is the smallest digital CHIRP sonar in the world and is ideal for use by small ROVs, as a first-rate obstacle avoidance sonar in miniature form.

The Micron DST Sonar can be controlled by a customer supplied PC equipped with Tritech AIF card or laptop equipped with the Tritech Seahub, configured for either RS232 or RS485 protocols. The sonar has a standard auxiliary port to allow it to interface with other Tritech sensors.

Tritech’s SeaKing range of mechanical imaging sonars comprises the SeaKing Hammerhead, Super SeaKing, Super SeaPrince and Micron sonars. All products in the SeaKing family (or third-party products within the ARCNET communications link or RS232/ RS485 as Tritech’s SCU has 4 independent ports which can be configured to those comms.), can be run simultaneously, using the same processor and display; such as Tritech’s Surface Control Unit (SCU) or a customer supplied PC or laptop.